Thousands of businesses have thrived during the past 30 years due to the dedication and knowledge of hundreds of students, alumni and staff in the Wharton Small Business Development Center.
Feature
by Paul Richards C10
Photos by Colin Lenton
Summer 2013
News
Careers
Entrepreneurship
Leadership
Management
Share:
Facebook0Tweet0LinkedIn0

John McAdam was between gigs.

After his latest CEO position came to an end in 2006, McAdam, WG ’90, figured it would take about a year to find the next one. He decided to fill that time as a volunteer at the Wharton Small Business Development Center (SBDC). Therese Flaherty, the SBDC director, suggested he prepare to teach business planning by sitting in on a class taught by a fellow Wharton alumnus, John Ondik, WG’94.

While observing, McAdam not only drafted a mergers-and-acquisitions business plan; he started that business himself. He has been teaching business planning alongside Ondik ever since, and the two have become fast friends.

This pairing of Wharton alumni is not coincidental. Flaherty, who became director 12 years ago, has strategically recruited Wharton and Penn alumni for lead positions, both paid and volunteer. Her reasons are clear.

“We need people who have the skill and the business experience,” she says. “We have to have people who can command the respect of people in this program. We need the wisdom. It’s not just about the analysis, but how you relate.”

Founded in 1980, the Wharton Small Business Development Center is one of 18 in Pennsylvania and the only center of its kind among peer business schools. Its mission is to “help businesses start, grow and prosper,” says Flaherty. Programming is broadly focused, ranging from individuals with a startup idea to businesses that have several million dollars in revenue. Flaherty and her team of alumni each came to the SBDC through different routes and fulfill different roles, but they are united by a passion for giving back to the School and a commitment to the development of Wharton students and the Philadelphia community.

If Ondik’s business planning students want a little extra instruction, they know where to find him. Every day before class in the Huntsman Hall café, he holds office hours. Ondik makes himself available for at least an hour to anyone from his class who shows up. Sometimes, he’ll talk to one person for the whole hour; other times he’ll split his session between four or five people. His dedication extends well beyond campus, and he occasionally meets these entrepreneurs for coffee and two hours of pro bono consulting.

“I feel it’s my commitment to my students that they have access to me,” he says.

Ondik has been connected to the SBDC in one way or another since he was a student. He was an MBA consultant for the center, working in a “bullpen” environment where he offered over-the phone advice and built his own portfolio of local businesses. His experience at the SBDC led him to work for several large consulting firms, but he remained involved through an ad hoc alumni advisory board and by serving on panels throughout the years. When Flaherty began her tenure as director, Ondik was one of her first alumni business planning teachers, and he has been a staple of the program ever since.

In teaching, Ondik is upbeat and motivational, striving to make a personal connection with his students. And yet, despite his own history of working with entrepreneurs, he remains humble about his impact. “Woe be it unto me that I can predict the likelihood of success or failure of a person’s business,” he says of his approach. “I try not to make judgments about the idea, because I’ve seen crazy ideas make people lots of money and I’ve seen slam-dunk ideas that, three years later, are no further along than they were before.”

Instead, he tries to ask tough questions that lead his students to their own insights. Ondik breaks things down for his students in ways they may not have considered before. In his class, the big picture is reduced to step-by-step fundamentals.

“Why would somebody reach into their pocket and give me a dollar for this rather than buy a hot dog, put it under their mattress or put it toward their kid’s education?” he explains.

Ultimately, Ondik believes, the greatest revelations come from the conversations his tough questions inspire. Even if a student leaves his class more firmly entrenched in her own idea, she’ll “be smarter by us kicking it around,” he says.

McAdam differentiates himself from Ondik, but is clear that their friendship—and joking rivalry—is beneficial.

“John and I compete to make each other better instructors,” McAdam explains.

McAdam and Ondik have the same end goal—to guide their students through the process of writing a business plan—but their tactics differ.

McAdam explains that you have to carefully track your client. He sees his role not just as that of teacher, but as a guide against poor choices. If he sees someone about to make a major life mistake, he aims to keep him or her grounded.

“It’s hard because learning can be painful, especially if it’s your passion or big dream and it needs to be altered to be more commercially viable,” he says.

Even so, failure in the business planning program isn’t necessarily a bad thing.

“An entrepreneur that fails and is ready to dust off and try again has a real fertile mind and makes a great student in this program,” says McAdam.

Since beginning his teaching role in 2006, McAdam has seen a number of successes too. From a clothing line for breast cancer survivors to one of 2011’s fastest-growing companies in Philadelphia to an online seafood distributor, McAdam has nurtured a diverse cohort of businesses.

McAdam credits Wharton for stimulating his interests in entrepreneurship as a student. A class by then-Wharton professor Ed Moldt required him to write a new business plan every week.

“I almost wish I never took that class,” McAdam jokes.

“I have to fight my temptation to start businesses; it’s stuck with me 20 years later.”

As a result, the business McAdam launched while observing Ondik’s course was actually his fifth or sixth, following a computer company as an MBA student, a real estate firm and a small investment organization.

“The teamwork among the MBAs in this program is extraordinary. Every single member of our teams has a story,” says Mark Maguire, WG’80, who leads the MBA Business Building Program. One MBA student, for instance, worked with a client who urgently needed improved financial projections. She pitched the MBA Business Building team on a Thursday in February looking for an expert to build a three-year financial projection model over the weekend. One student volunteered another—who was not in the room—to deliver the model by Monday morning. This financial expert built the model on a plane flying to Colorado for Wharton Ski Weekend. The consulting team met again at 8 a.m. Monday morning to review the output and presented the final model to the client Tuesday at 9 a.m. She used it to successfully pitch to an investor on Wednesday.

Maguire works with seven teams of two MBA students each, who meet on a weekly basis with clients from small community businesses, which include a wide range of operations such as small manufacturers, professional service providers, online retailers and restaurants. Maguire serves as a mentor and coach to the student teams, drawing from lawn-mowing business in college—to ensure high-quality interactions and, if all goes well, help students gain repeat clients.

Maguire’s return to Wharton was by way of the corporate world with a 20-year pit stop in Asia, where he worked for several companies in Japan and built a business in Thailand. After taking a buyout, he returned to Philadelphia to restart the local chapter of the Service Corp of Retired Executives, a group similar to the SBDC in that it consults with entrepreneurs and small businesses. Under his four years of service, the group saw more than 1,000 clients, amassed 30 volunteers and built relationships across the city.

“We designed this space so there’d be a lot of glass,” she says of the SBDC office. “When something goes wrong, everybody knows about it; no closed-door meetings.”

Mitts’ program accepts about 80 undergraduate and MBA students a year— with a competitive admissions rate of about 14 percent—and lets them work with the CEO s of intellectual property-based and complex operating businesses in transition. The students learn not just to perform data-based analysis, but to lead conversations with key stakeholders that result in meaningful change.

Mitts is a practitioner and academic— she started her own venture capital fund that focused on telecommunications and teleservices and is currently pursuing a Penn Ph.D. in anthropology—and aside from her relentless emphasis on understanding data, she espouses the significance of culture and context.

To this point, she is not a fan of the word “entrepreneur.” Instead, she examines the cultural onus for the seeming rise in entrepreneurship.

“People are having to create their own jobs because there are no jobs, and for some people it’s very freeing and life-affirming and embracing to go out and create your own sense of what is possible,” she says.

However, that philosophy is not to say that starting a business is easy. Mitts’ anthropological work focuses on the faulty assumptions that entrepreneurs bring to their craft. “We’ve noticed that there has often been a lack of focus on thinking through the business model,” she says. “But if you can disaggregate and then resynthesize the parts of the business model (sales, operations, strategy) to understand how the business is meant to work, you can understand more clearly how to transform it or how to build it.”

To this end, Mitts has recruited private equity investors, consultants and a range of alumni to work as part of 10 different subpractice areas, ranging from financial services to clean tech.

In the past five years, the high growth practice has worked with clients in a range of established, private equity-backed and IP-based businesses—many thought to be difficult for consultants to work with because they changed fast and their data were difficult to obtain.

“Further, these businesses generally have little funding to spend on private consultants. We fill a vital need in the market,” Mitts notes. “On the one hand, we serve clients on the brink of great change, where we can make a transformative difference. At the same time, we help build our students’ leadership experience and real-world skills that enable them to create impact.”

“We’re kind of a teaching hospital model,” says Flaherty of the SBDC’s structure. “If you went to the Hospital of the University of Pennsylvania, you’d have students or residents doing some of your procedures, but you’d also have attending doctors making sure the diagnosis was right and the processes and procedures were done well.”

Alumni like McAdam, Ondik, Maguire and Mitts are the attending doctors of the SBDC. And it’s not just them—the long roster of alumni employed by or volunteering with the SBDC expands well beyond this quartet.

What is it that brings them all back?

“It’s the fact that they’re working with some of the brightest people who care about doing the right thing,” says Flaherty.

“It’s rare that you get a chance in this world to work with wonderful people who are learning and growing, and work with entrepreneurs who are going to use what you say.” 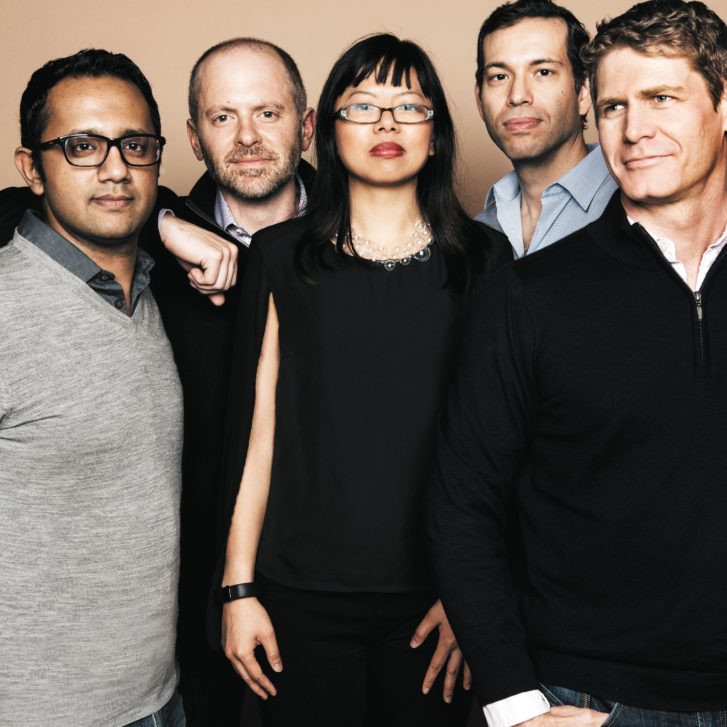 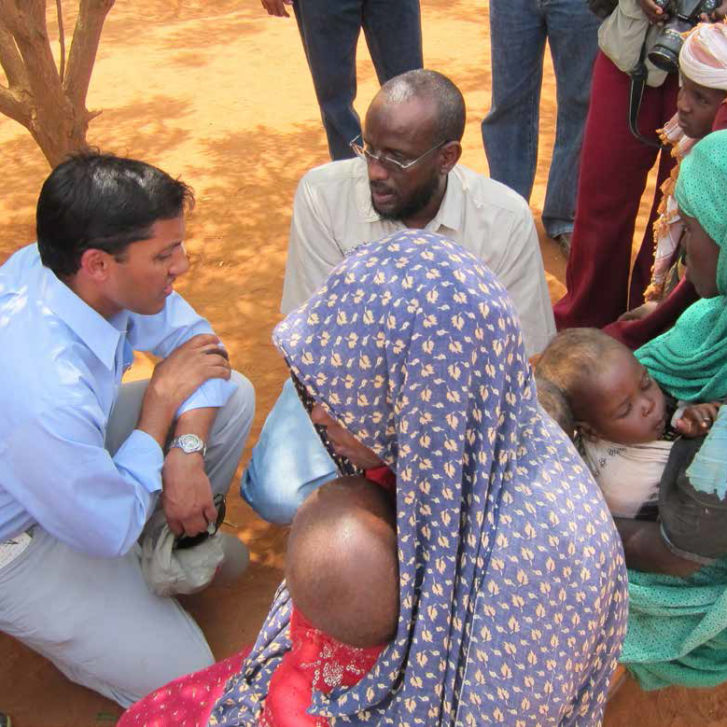